Counting Calories For Weight Loss – Does It Really Work? 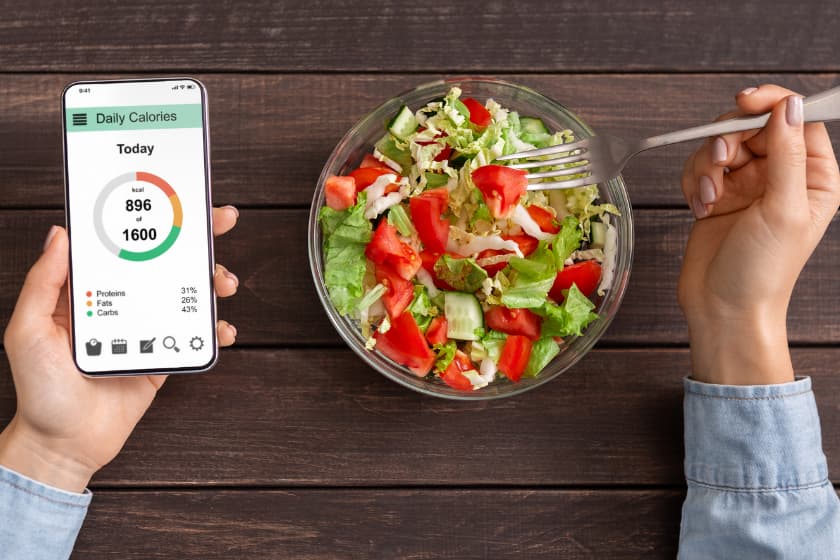 Even modern-day fitness trackers tell you to get in your 10,000 steps and to move every hour.  I’m not opposed to this tactic and the benefits of walking, working out, and moving, but that isn’t the whole truth.

Reality:  You exercise to build muscle and stay fit;

You optimize your hormones and diet to lose fat.

What is a Calorie?

A calorie is defined as the amount of energy you would need to raise the temperature of water by one-degree celsius.

However, this theory only focuses on “eat less and exercise more”.  This theory fails to take into account the effect of hormones and the thermic effect on body fat accumulation.

A calorie from protein may have the same “energy or calories” per gram as glucose.  It would be rational to conclude that a calorie of protein would have the same effect on body fat accumulation as a calorie of glucose.  This doesn’t take into account the thermogenic effect of how different types of calories burn and create heat in the body.

Protein has a higher thermic effect than any other macronutrient, and the body uses 25% of the protein calories just through this heat-generating effect.  In other words, for every 100 protein calories consumed, 25 of those calories are burned through digestion and thermogenesis.  This is why you may get heated up when you eat protein.

Moreover, your body doesn’t use protein for fuel unless the body is starving, and if it reaches that point, it causes a thermic effect, where protein is turned into glucose during a process referred to as gluconeogenesis.  It is very difficult for the body to store protein as fat.

Depending on the complete profile of your diet, meaning whether you are on a Standard American Diet, a Low Carb Diet, or a Fasting Protocol, consuming protein can trigger fat burning or fat-storing by the body.

If you are on a low-carb diet, eating protein can actually increase fat burning by raising glucagon, the fat-burning hormone.  However, if you are on the Standard American Diet, consisting of high amounts of carbohydrates, consuming protein may increase insulin causing a higher percentage of the carbs to be stored as fat.  This is due to the complex Insulin to Glucagon Ratio.

To take it down to the cellular level, the mitochondria in the cells can be “coupled” or “uncoupled.”  Mitochondria that are coupled are only burning fat needed to get ATP, which is “true cellular energy”.  However, mitochondria that are uncoupled are burning more fat than the fat they need, and it generates more heat.  That created heat increases the thermic effect and caloric burn.  Increasing the number of ATP not only increases caloric burn, fat burning, and metabolism but also increases energy naturally.

Insulin pushes fat cells to be more coupled and generates no heat, lowering the caloric burn.  On the contrary, low levels of insulin that are present during a ketogenic state push the mitochondria to be more uncoupled.  Thus, the mitochondria becomes “less efficient” and burns more fat.

Ketones do have a caloric value but they don’t get stored in the body; they get excreted through the body and are being “wasted” through breath or urine.  This action inherently lowers fat storage.

Insulin tells the body what to do with energy.  Without fail, if insulin is up, the body is telling the cells to store fat and slow metabolic rate.  Insulin hates “inefficiency”.  Insulin slows metabolism and becomes “better” at storing fat in the fat cells.

In a study by David Ludwig, the group that ingested the most carbs and least fat, had the most depressed metabolic rate by 100 calories.
The group who ate low carb and high fats, raised their metabolic rate by 200 calories.
The difference in how much they burned was 300 calories while the number of calories consumed was the exact same.  The advantage of eating fat is that it has very little to no effect on insulin while glucose or carbohydrates raise insulin and puts the body in a “fat-storing state”.

In another study by Kevin Hall, the groups were given the same amount of calories, but those on a ketogenic diet increased their metabolic rate.

Most of us have experienced chronic stress which causes cortisol to continue to be released by the adrenals, which raises blood sugar without any caloric intake.  Furthermore, the body shuts off its digestive functions when it is too stressed as a survival mechanism.

As a result and a need to “survive,” the body will also slow down its metabolic rate.  Therefore, your body will increase fat storage with the increase of blood sugar and insulin, in addition to slowing down the metabolic rate.

How Do You Increase Your Metabolism, Caloric Burn and Fat Loss?

Accelerated Keto switches the body into ketosis within 30 minutes, which lowers insulin, increases fat-burning, increases metabolism, and suppresses cravings for carbohydrates and sugar. Furthermore, it encourages “uncoupling” of the mitochondria, generating more “heat” and thermic effects throughout the body.  It also helps lower stress and cortisol levels naturally by encouraging a proper balance of “happy hormones” like GABA, Serotonin, and dopamine.

Accelerated Keto also increases ATP production in the mitochondria, raising caloric burn and energy naturally.
The additional ingredients in the Accelerated Keto break down saturated fats into unsaturated fats. These unsaturated fats are easier for the body to utilize and easier for the body to convert to ketones. Imagine a wax candle that is solid, and when we light the candle, the solid wax (fat) turns into a liquid, which is then taken up by the wick to burn easily.

Because of this property, Accelerated Keto is able to de-fat the liver as well. It is well known that the liver is responsible for converting stored fat into ketones.
The more a person’s liver is defatted and unclogged, the easier it is for the liver to function in all areas including producing ketones. The liver is also where the thyroid hormone converts from T4 to T3, and as the liver function becomes better, the thyroid works better as well, increasing metabolism and energy further.

Sufficient iodine in all tissues and cells helps to produce 36 ATP per mitochondria, compared to just 2 ATP on a high glucose diet; this has profound implications for all levels of function, including brain function. When we are low in iodine, we tend to transition into glycolysis, which only produces 2 ATP, bypassing the normal Krebs cycle and the mitochondria altogether. This significantly lower ATP production greatly contributes to low vital life-force, disease, and suppressed metabolism.

Through clinical studies, an improvement in the overall energy of the body, organ balance, and caloric burn as well.

Energy Enhancer Patches increase ATP production in the mitochondria, increase Heart Rate Variability, improve the bioelectrical measurement or “phase angle” or integrity of the cell walls, reduce inflammation, and increase endurance. Just after 20 minutes, the capacity of each cell increases.  It has been also shown to increase caloric burn by 300 calories per day.

With age, the cell walls become rigid and hard to penetrate with nutrients coming in and toxins going out. The Energy Enhancer Patches soften that cell wall and improve that phase angle within five minutes of applying the patch.

Additionally, the patch improves digestion and circulation which are essential for nutrient absorption that leads to improved energy. Lastly, it increases beta-oxidation which is the fastest way to increase cellular energy.  As a plus, it increases fat burning and muscle growth.  They work synergistically with the Accelerated Keto in your fat burning and tapping into an endless supply of fuel source on your body.

By eating a diet focused on high protein and fat, the thermic effect on caloric burn increases, the glucagon to insulin ratio is optimized, and the body is prone to burn fat, not store fat.  This diet will also stabilize blood sugar, cortisol levels, and insulin levels; all three of these factors encourage fat burning.

Find out how much protein you need to build muscle.

By squeezing your eating window within a period of 2 to 8 hours, the body is able to enter a state of autophagy, which is the recycling and cleaning up of disease and wasted cells.  This will mobilize fat and encourage fat oxidation in addition to lowering insulin and blood sugar, and raising glucagon.

Learn more about Intermittent Fasting and how it helps with fat loss.

Break a Fast with Protein

When you break a fast with straight protein there is a jump in glucagon and an increase in thermic effect and fat burning beyond that seen during the fasting period.

7-8 hours of sleep stabilizes ghrelin and Leptin levels, which are your appetite-regulating hormones, in addition to lowering your blood sugar and cortisol.  Poor sleep can lead to fat storage and weight gain.

High-Intensity Interval Training increases fat burning and calorie burn for up to 48 hours after the exercise.  On the contrary, chronic cardio can increase cortisol, break down the body and slow the metabolic rate.