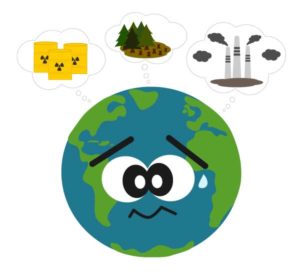 Why detoxing from Radiation is important:

The U.S. Environmental Protection Agency (EPA) confirms “small amounts of radiation over a long time…raises your risk of cancer. It can also cause mutations in your genes.” (NLM, 2011).

Two types of radiation exist, and both damage DNA: ionizing and non-ionizing

Ionizing radiation is from waves generated by ultraviolet, nuclear medicine/ weapons/ power plants, cosmic rays, etc. It creates the worst bad free radicals and most damage to DNA by destroying the Covalent Bonds.

Non-ionizing radiation, known as “electropollution”, is from waves generated by power lines, radio, HAARP, television, radar, cell phones, Smart Meters, WiFi, microwaves, infrared, etc. It creates less DNA damage than ionizing, by destroying the Van Der Waals Bonds (States, 2011), but was still classified as a Class 2B carcinogen by the International Agency For Research On Cancer in 2002 and the World Health Organization in 2007.

Do You Need to Be Concerned About Radiation?

Food, plants and/or water from Tokyo, Hawaii, Canada, the four corners, center, etc. of the United States of America, Mexico, Peru, Argentina, Israel, etc. all tested exceedingly high in internal/ in vivo/ intracellular radiocontamination in 2012 (especially Tokyo and Hawaii), which are all currently expected to be even higher globally due to Fukushima.

Fukushima’s nuclear disaster involving six reactors spawned by Japan’s largest earthquake in history (9.0 on Richter Scale) on March 11, 2011 was ranked the highest International Nuclear & Radiological Event Scale (INES) Level 7 rating with concerned engineers asking for a new Level 8. Fukushima is now documented as uncontained, beyond meltdown into “melt-through” having pumped out huge amounts of radiation, including I-129 (half-life of 15.7 million years!), and, dwarfing, by thousands of times, the contained Chernobyl (Washington’s Blog, 2013). Chernobyl is the site of the only other INES Level 7 nuclear disaster, which involved only one reactor on April 26, 1986.

On March 23, 2013 a study showed 900 trillion becquerels of strontium-90 in the ocean from Fukushima cooling water discharge (ENENews, 2013). On August 20, 2013 Japan’s Governor of Fukushima Prefecture declared a national emergency (ENENews, 2013), and six days later a photo of the boiling sea on Fukushima’s coastline went viral on the internet. On November 14, 2014, a massive 40,000% increase in radiation was detected below ground between Fukushima Units 1 and 2 (ENENews, 2014). A sobering 2009 meta-review of 5000+ scentific papers documented nearly one million people worldwide died—not the local 4,000 publicized—from Chernobly’s ionizing radiation, the invisible enemy that continues its damage globally to this day (Yablokov, 2009)—and Fukushima is far, far worse.

The lifetime of global poisoning from ongoing ionizing radiation of nuclear disasters, leaks, weaponry and scanning devices—Fukushima; Hanford, Washington; Fort Calhoun, Nebraska; Mineral, Virginia; 48 U.S. nuclear plants leaking tritium (Donn, 2011), radioactive soil and empty ammunition casings from Afghanistan and Iraq, and TSA airport scanners (ask for a patdown instead) with plans to expand into bus and train stations and to eventually scan people at a distance as well as in moving automobiles—must all be addressed as global radiation poisoning is at its peak.

Even so, Japanese imports have not been suspended and the EPA is to change its 1992 Protective Action Guides (PAGs) allowing allegedly “safe” levels of ionizing radiation to radically increase by up to 100,000x post-Chernobyl levels—without U.S. Congressional approval (Adams, 2011).

The truth is that there are no “safe” levels of radiation.

What Can You Do to Protect Yourself?

Protect yourself from the harmful rffects of both Ionizing & Non-ionzing Radiation with the new Accelerated NucNoMore®.

Our formula of scalar enhanced, hyper-extreme oxygen-saturated and hydrogen-charged spring water with tissue regeneration, healing and antidotal frequencies for:

How Does Accelerated NucNoMore Work?

Accelerated NucNoMore frequencies are neither based on homeopathy nor radionics, but rather on an offshoot of Tesla technology, and they communicate “wirelessly” throughout the entire body via the medium of liquid, such as water, a major component of every cell.

Nikola Tesla stated that oxygen is the only element that will pick up and carry electrical energy (Pressman, 1994), or “light”. Live blood cell analysis using dark-field microscopy at high magnification (~28,000 times) shows healthy red blood cells carrying oxygen emanate a mysterious “light” (Young, 2001). Dr. Fritz-Albert Popp measured with his photomultiplier that the greater the biophotons, or “light”, emitting from the DNA to the cell wall and from one cell to another, the greater the communication both inter-cellularly (nutrients in and toxins out) and intra-cellularly (proper ATP or energy production).

An intensive 2012 in vivo radiocontamination study with proprietary, accurate, “non-guesstimating”, non-conventional equipment showed 100% of 32 random test subjects, who were all extremely radiocontaminated, zeroed-out with Accelerated NucNoMore and ~80% did so in < 21 days. Of said 32 test subjects, 31 maintained a zeroed-out state continuously for ~2½ years (1st Qtr. 2012 to 3rd Qtr. 2014) without maintenance dosages, even after they consumed, and continued to consume, highly intra-cellularly radiocontaminated food. The anomalous subject, after successfully zeroing out in the 1st half of 2012, showed increased in vivo radiocontamination at 10% of pre-study levels after receiving a CAT scan (~1000x the radiation of an X-Ray) which was quickly zeroed-out a 2nd time upon resuming an Accelerated NucNoMore regular regimen.