Why This Tincture Is The Best Iodine Supplement 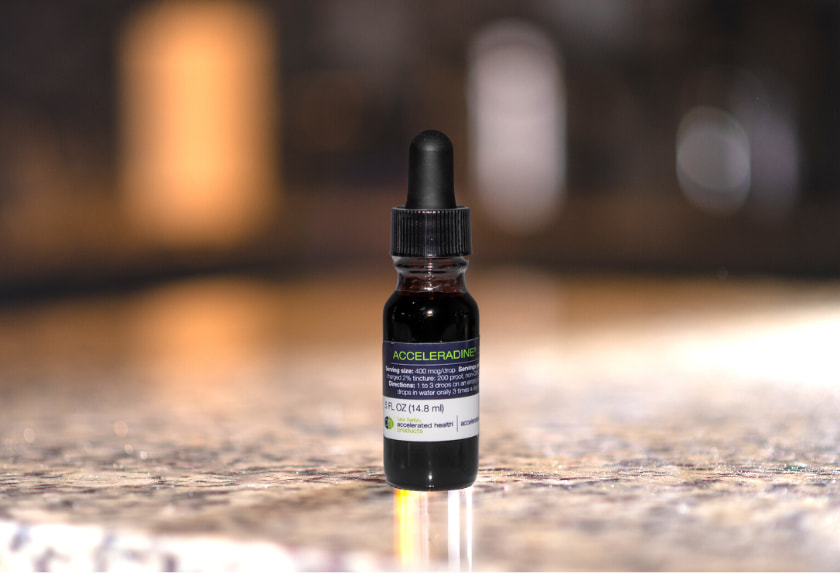 Iodine supplementation is controversial, especially when you talk to medical practitioners and thyroid practitioners.  This is partially due to the fact most iodine supplements are “toxic,” due to a few different factors.  When people experience negative side effects from iodine, it usually is due to a toxic source of iodine or toxicity from the other molecule in the formula.

With this said, around 96 percent of the population is iodine deficient, as it has been depleted from our soils, and the sources of iodine from the sea have been contaminated by nuclear radiation.

People with compromised health have far less energy to break down molecules, compounds, or complexes of iodine into its bioavailable form of monatomic iodine (I–) that the body can use. Anything not bioavailable can become “foreign” or “toxic” to the body.

All iodine supplements are not the same.  The different forms can be useless, benign, toxic, or beneficial depending on the formula, source of iodine, and chemical bonds.  If the iodine supplement comes from a radio-contaminated source or a source that has been exposed to heavy metals, that radiation and heavy metal exposure could damage the cells as it seeks out the iodine receptor sites.

The following are the different forms of iodine supplements:

The solution that is created with 75% potassium iodide to 25% of diatomic iodine in water is only 20-50% bioavailable.

Iodine Side Effects or Allergies

Many people are afraid of taking too much iodine due to an allergy or side effects. Iodine “allergies” are documented when someone reacts to:

Allergic reactions are NOT from unbound, singlet, anionic iodine atoms (I–), like in the Acceleradine, that the thyroid requires to synthesize the hormones, T4, T3, or T2 which need 4, 3, or 2 singlet unbound Iodine, respectively. So, T3 is NOT created using one diatomic iodine molecule and one potassium iodide; T4 is NOT created using two I2, and no thyroid hormones are created with any bound forms of iodine. In other words, readily bioavailable monatomic iodine (as in the Acceleradine) allows for optimal production of thyroid hormone needed in all 100 trillion cells in the body for proper mitochondrial function.

Why We Need Iodine Supplements

Iodine is The Most Powerful Antioxidant

Active Iodine (I–), which is monatomic or one molecule of iodine,  is unarguably the most ancient and powerful antioxidant on earth. Radioactive particles, even those found in “Natural ” Background Radiation, are the most damaging free radical to the DNA, exhausting the most antioxidants.
Although antioxidants, in general, provide radioprotection, iodine in the form of I–, created 3 billion years ago, absorbs 3,000 times more ionizing radiation compared to normal tissue. Iodine acts as a “frontline soldier” to absorb ionizing radiation at the outermost cellular, mitochondrial, and nuclear membranes in order to protect the innermost DNA from radiation damage.

Iodine is also antibacterial; anti-viral; anti-fungal; anti-parasitic; anti-inflammatory; anti-allergenic; antihistamine; and mucolytic. It is able to hydrate the cells without water, in addition to kicking out the toxins out of the cells including bromide, chlorine and fluoride.  Those toxins are what lead to cancer, disease, and overall cellular damage and aging.

Iodine is necessary for thyroid health, metabolism, and energy at the cellular level.  T4 and T3, are the thyroid hormones responsible for energy and optimal metabolism, and the “4” and “3” represent molecules of iodine.  Furthermore, not only does iodine perform DNA repair, but it also has a unique function known as healthy apoptosis, which supports the body’s ability to eliminate mutated cells underlying cancer or other chronic diseases and replace those cells with healthy cells.

Iodine is the best anti-parasitic.  The intestines produce and contain 95% of the serotonin found in the body. Serotonin is a neurotransmitter that creates a feeling of well-being and happiness. Since parasites eat serotonin, iodine is therefore important in ameliorating mood disorders like depression and anxiety.

“Iodine sufficiency” activates each mitochondrion to produce 18 times more brain cell energy. The result of this is an amelioration of depression and anxiety and an increase in IQ and clarity of mind. For example, mothers who have enough iodine during pregnancy have children with up to 13.5 points higher IQ, and iodine sufficient pre-school children (25-59 months) have up to 9 points higher IQ in 12 weeks.

Enhanced brain function which leads to mental clarity, helps expand our consciousness. From a spiritual perspective, iodine, the main food for the thyroid (located in the neck), is the most spiritual nutrient since it provides the necessary “bridge” between the lower energy centers of the body and the higher energy centers in the head for an elevated consciousness.

Part of this is due to heavy toxicity from fluoride, mercury, lead, aluminum, and cadmium attaching to iodine receptor sites in the pineal gland; the pineal gland is known for activating the “third eye”, or our “higher self”.  When sufficient iodine is present, those toxins that are responsible for clogging the pineal gland have nowhere to attach to, as the receptor sites have plenty of iodine.  This is enhanced further with Acceleradine because it is the most bioavailable with the highest Scalar frequency formulation.

Iodine catalyzes DNA repair, and as a last resort, healthy apoptosis when DNA damage is too great. Healthy apoptosis is the natural programmed cell death of a cell that is too aged, sick, mutated, or traumatized, which is then replaced with a healthy cell. Iodine, or unbound I–, is the only element that always induces healthy apoptosis on its own without assistance from another element or compound. Therefore, iodine is considered “the wild card” of all nutrients.

Why Acceleradine is the Best Iodine Supplement

This occurs due to the unbound, singlet iodine atoms (I–).  It is “impossible” to trap and suspend single atoms of iodine into a tincture but our proprietary process has done it!  The thyroid can only synthesize thyroid hormone with singlet, anionic iodine atoms (unbound I–), not diatomic molecules (I2), not compounds sodium iodide, potassium iodide, and not complexes like the synthetic iodine used in surgery and sold in pharmacies known as povidone-iodine, an iodinated polyvinyl polymer; or radioactive iodide or nonradioactive iodide.

This provides the antidote for nullifying and eliminating the unnatural scalar waves used in scalar weaponry. This perfectly centered and highest frequency energy field organizes DNA, a prerequisite for true wellness, and is an underlying force behind all energetic anatomies.

Acceleradine has been tested for radioactivity with private, very sensitive, proprietary equipment, and is radiation free.  There are three major global sources of raw materials for iodine: two are in Japan and one is in South America.

As I mentioned above, Unbound I– is the correct form of iodine needed to synthesize thyroid hormone. Acceleradine is the only anionic unbound atom of iodine (I–) that ensures 100 percent absorption and efficacy compared to iodine solutions.

Iodine catalyzes DNA repair, and as a last resort, healthy apoptosis when DNA damage is too great. Healthy apoptosis is natural programmed cell death of a cell that is too aged, sick, mutated or traumatized, and is then replaced with a healthy cell.

Unbound I–, like Acceleradine, is the only element that always induces healthy apoptosis on its own without assistance from another element or compound. Since the dead cell waste must exit the body, a healing crisis can occur if another form of iodine is used besides Acceleradine too quickly;  this is especially worsened when the wrong iodine is taken without increasing fluid volume with Accelerated Ancient Salt to dilute the waste.

Furthermore, when the Accelerated Ancient Salt and the Nucnomore is taken with proper ratios of water, salt and iodine, water (H2O) is able to pass through the cell’s electrolytic membrane, splitting into two hydrogen (H+) and one oxygen (O–) inside the cell. In this case, the cell membrane acts as a hydrogen fuel cell creating clean fuel (H+) for the mitochondria (instead of using dirty fuel such as glucose). Hydrogen (H+) as clean fuel produces no waste—just H2O to further hydrate the body.

With enough iodine, Oxygen (O–) combines with Acceleradine (I– ) inside the cell creating hypoiodous acid, which immediately converts to H2O to further hydrate the cell. Conversely, glucose produces alcohol when consumed by parasites, and carbon dioxide (or carbon monoxide in oxygen deficient cells) when used by the mitochondria.

Sickness is correlated with low cell millivoltage and electron deficiency. Raw food absorbs photons from the sun, which are converted to electrons (energy) in the body.  Acceleradine’s superior iodine formulation of unbound I– also donates electrons to the body. Bound molecules or other forms of iodine do not have an anionic charge and do not donate electrons; on the contrary, they rob them because the body’s oxygen, enzymes, chemical reactions, and electrons are all needed to extract the only usable form of iodine, which is unbound I–.

Since toxins and parasites have a positive charge, the opposite anionic charge of Acceleradine pulls toxins and parasites out from inside the cell, creating waste that needs to exit the body. In order to properly rid the body of the waste, you should do the following:  a) drink proper ratios of water and Accelerated Ancient Salt to increase fluids to dilute the waste; b) take salt baths or ocean swims to pull the waste out through the pores of the skin; c) use enemas; or d) exercise.  These are all solutions that help move the lymphatic system, and prevent a healing crisis or detoxification may occur.

Scars, like parasites and toxins, are positively charged and block energy—especially in the skin. They can block the Chinese meridians that run through the skin but also deep inside the body. When unencumbered by scar tissue, these energetic pathways can allow electrons to flow in both ascending and descending directions to keep the body healthy.

The skin is one of the richest sources of hormones and immune cells, and also holds about 20% of the body’s hydration as well as iodine reserves. Scar tissue can also form deep inside bones, organs, and soft tissue. Whether from surgeries, tattoos, piercings, birthmarks, broken bones, extractions, moles, or warts, scars can trap toxins and parasites as well as emotions. Acceleradine (unbound I–) coupled with the deeply penetrating Castor Oil can help depolarize positively charged scar tissue, releasing trapped waste and unprocessed emotions.

Acceleradine® ingredients are simple and vigilantly pure. Acceleradine is radiation-free with only two ingredients: singlet iodine atoms (I–) as stable isotopes of I127 and 200 proof organic, non-GMO, grain alcohol.

Directions:  Start with 3 drops in water three times a day on an empty stomach at least 15 minutes away from food or supplements.  Increase by one drop per day until you reach 25 drops 3 times a day.  Stay at that amount until our world’s toxicity and radiation levels decrease.