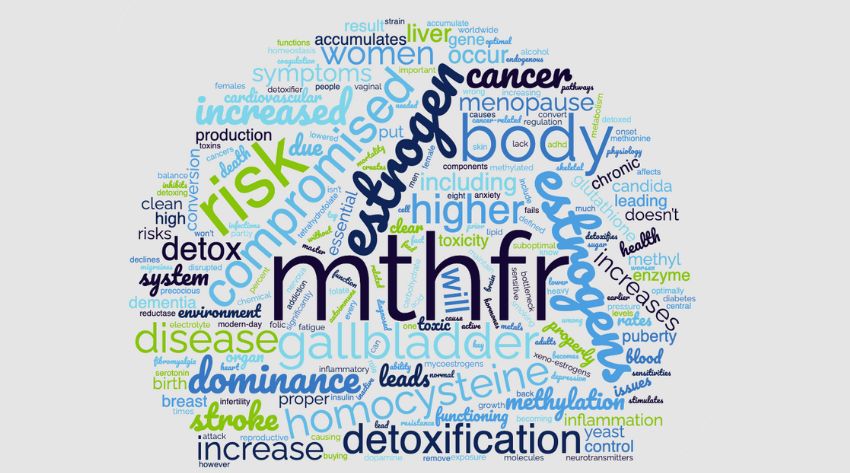 MTHFR, or Methyl Tetrahydrofolate Reductase, is defined as the enzyme essential for methylation and detoxification in every cell of your body, including detoxification from estrogens, heavy metals, and other toxins.

The role of MTHFR is to convert inactive folic acid, or B9, into active methyl folate.  When this conversion doesn’t occur optimally, detoxification fails to occur properly.

Over 50% of people have a compromised MTHFR gene which inhibits their detoxification pathways, leading to a higher risk of disease.

MTHFR affects the key components of health, including how the liver detoxifies, how the neurotransmitters clear out of the brain, how to clear out toxic hormones, and how to remove inflammatory molecules before they accumulate in the body.

What is Homocysteine and How is it Related?

Homocysteine is a non-proteinogenic α-amino acid. It is methylated by MTHFR into Methionine. If this conversion doesn’t occur and homocysteine accumulates in the body, homocysteine creates inflammation and can lead to heart attack, stroke, dementia, and other chronic health issues.

Sugar, alcohol, and smoking will increase homocysteine levels and put more strain on the MTHFR enzyme.

However, too much endogenous estrogen or xeno-estrogens from the environment put the body at risk. With a suboptimal MTHFR gene, detoxing from estrogens becomes disrupted and compromised. As a result, disease and mortality risks increase significantly.

Estrogen Detox, MTHFR and the Gallbladder 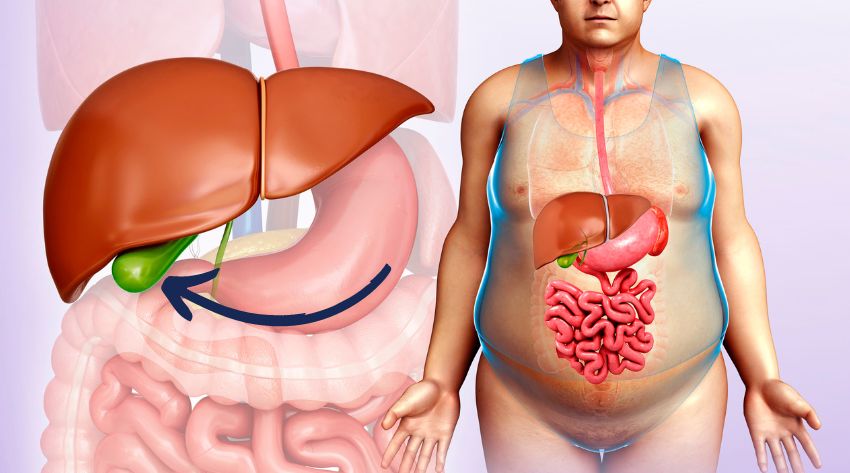 Your gallbladder is the most sensitive organ to estrogen and methylation; if the gallbladder isn’t functioning properly, then MTHFR is compromised further and estrogens won’t be detoxed. As a result, those estrogens will back up the system, causing inflammation and disease.

It is essential to maintain a clean and optimal functioning liver and gallbladder for proper estrogen detox, methylation, and lowered risk of disease.

Supplements in the Ascent Diet Cleanse include:

Acceleradine regulates Estrogen production and cleans the blood so the liver can detox the estrogen properly. Iodine decreases estrogen in the receptor cells which helps reverse Estrogen Dominance.

It also helps with fibroids, PCOS, regulating SHBG and other issues related to hormonal imbalances. Acceleradine is also anti-inflammatory and a powerful antioxidant, which helps neutralize the inflammation and oxidative stress that leads to Estrogen Dominance.

Acceleradine triggers healthy apoptosis (the natural death of traumatized and unhealthy cells), which helps reverse Estrogen Dominance. It is the only iodine that is enhanced with Scalar frequency, radiation-free, 100 percent absorbable, and can reverse the damage done to the DNA.

Accelerated Keto is now the top-selling Keto supplement in the US, and with good reason. Accelerated Keto puts your body into ketosis and fat-burning mode within 30 minutes.

It helps to control appetite and increases physical and mental energy, as it teaches your body to utilize its own fat stores for energy. As your energy increases and your cravings for sugar decrease, you are able to intermittently fast, reduce Insulin Resistance, cleanse the liver, clean up the excess estrogen, reduce inflammation and reduce oxidative stress.

Where Accelerated Keto is different from any other exogenous ketone supplement is it has multiple herbal cofactors in the formula to increase ATP production in the cells (which is your true cellular energy), and to “De-Fat” the liver where fat burning occurs, hormones are regulated, and sugars are processed. The liver is where the body can detox the xeno-estrogens that lead to Estrogen Dominance.

Accelerated Ancient Salt “plumps up” the volume of fluid inside and outside the cells which helps clean the liver, supports apoptosis, induces DNA repair, and cleanses the body of excess estrogen. It also helps with bile production, breaking down fats in the liver, and encourages improved digestive health.

Supplements included in the Liver Flush Kit will cleanse the gallbladder and liver so they can detox estrogens, support proper methylation, and function optimally.

Glutathione is known to be the master antioxidant and helps with liver detoxification. Some glutathione supplements that are meant to support detoxification will actually make matters worse because glutathione contains sulfur, and many people cannot detox sulfur. The Glutathione Stem Cell patch triggers your OWN production of glutathione and eliminates this issue.

Glutathione may help detox the liver of excess estrogen in addition to being a powerful antioxidant, detoxifier, immune booster, and neuroprotector. Glutathione may also help lower homocysteine and inflammation in the body.

The patch increases Glutathione by 300% in 24 hours.

As estrogen goes up, the need for the b vitamins increases to counteract the estrogen. B vitamins are only found in animal protein and green leafy vegetables. However, most vegetables with the proper vitamin B have plant poisons like oxalates or sulfur which can inhibit detoxification. It is essential to supplement with methylated vitamin B’s, like in the Bio-B 100, and consume wild animal protein and fish.
Bio-B 100™ is a multi B-complex vitamin, supplying vitamin B1, niacin, folate, and Vitamin B12, along with the phosphorylated forms of riboflavin and B6, plus the antioxidant enzymes SOD and catalase. This provides the needed B vitamins for those with MTHFR mutations.

Choline stops being produced in menopausal women. It is essential to help with Phase 2 liver detox, methylation of estrogen, and cell membrane support for Phase 3 detox. Additionally, choline may help facilitate the burning of stored fat and has been shown to prevent abnormal or excessive liver accumulation of cholesterol and triglycerides. It also may help support insulin sensitivity and overall hormonal balance.

Ca D-Glucarate is a specific form of calcium that assists the liver glucuronidation pathway by inhibiting the enzyme glucuronidase. Glucuronidation is one of the body’s many detoxification systems.

Calcium D-Glucarate has been shown to support the body’s ability to excrete lipid-soluble toxins and steroids, including estrogen. It supports glucuronidation by turning estrogen into its inactive form in Phase 2 of the liver. It doesn’t lower beta-glucuronidase in the gut, but it does help facilitate estrogen metabolism to be eliminated in the gut. Furthermore, it has been shown to inhibit aromatization and the conversion from testosterone into estrogen.

Laxa Comfort is a combination of natural herbs that helps to balance the vitiated Vata (Air), Dosha (Humour) and helps in daily and comfortable bowel movements. Daily Bowel movements are essential to keep the body from recycling estrogens.

Magnesium helps with Phase 2 Liver detoxification of estrogen, in addition to performing over 600 other biochemical reactions in the body. Magnesium Breakthrough is the only magnesium supplement with the full spectrum of all seven types of magnesium specially formulated to reach every tissue in your body. This provides maximum health benefits and reverses low levels which could be causing health issues.

Ola Loa ENERGY is the most powerful supplement available today for the control of homocysteine and to support methylation. Its formula provides vitamin C, glycine, and betaine (aka TMG) along with synergistic co-factors, coenzyme Q10 and acetylcysteine. The synergy is further enhanced by arginine, lysine, selenium, chromium and folic acid and hydroxocobalamin; they serve to methylate homocysteine, which is then converted into methionine, an essential amino acid. It also contains TMG (Tri-Methyl Glycine), also called Betaine, which is a source of methyl groups for the activation of methionine into SAMe. The methyl groups can be passed on by SAMe to support a number of bodily functions including detoxification.

The best sources of the proper B vitamins needed are in wild animal protein. Liver is extremely high in folate, b12 and riboflavin. Other sources of B vitamins include seafood, bison, lamb, grass fed beef.

Most green vegetables have folate in them but they also may contain plant poisons that disrupt absorption, cause leaky gut, and negate the positive effects of the folate it contains. Romaine lettuce and asparagus are vegetables that can provide the right vitamins without the negative side effects for most people. Spinach, kale, and broccoli are high folate vegetables but contain oxalates or sulfur which may disrupt detox pathways.