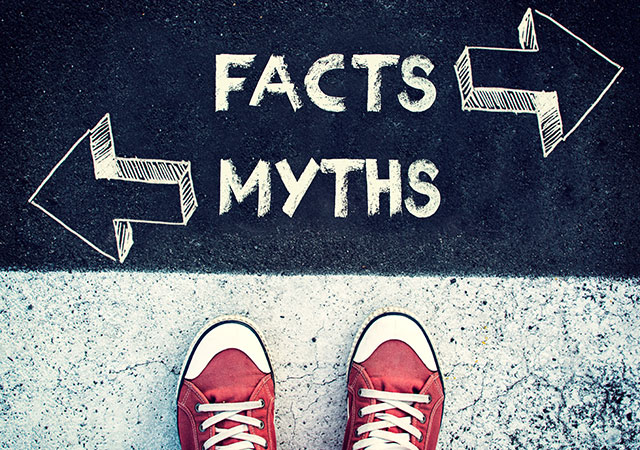 I am writing this with my tail between my legs, as I have fallen victim into believing almost every one of these myths. But, I think we all have at some point or another, as they have been repeated to us over and over again — we had no way of blocking this information out of our heads! Dr. Michael VanDerschelden sites multiple studies against each myth below.

MYTH #1: The Healthiest Diet is a LOW-FAT, HIGH CARB DIET with Lots of Grains

Numerous studies have been done on the Low-Fat, High-Carb diet. It has virtually NO effect on Body Weight, Coronary Heart Disease, Cancer, Stroke or other Disease Risks over the long term. The Old Food pyramid tells you to eat mostly bread, grains, and rice, and to use fats sparingly. The reality is you should flip the pyramid upside down and eat mostly healthy fats and little grains and carbs.

We are the only species on the planet that restricts sodium. What do you give horses on a hot day? A Salt block!

The studies have shown that there is “insufficient evidence to assess effects of reduced salt intake on mortality or cardiovascular events”. Despite modestly lowering Blood Pressure, reducing salt/sodium does NOT reduce the risk of heart attacks, strokes or death. In fact, one study admits they need to do further studies to confirm whether restricting sodium may be HARMFUL for people with heart failure.

Additionally, in another study, the Risk for heart disease was 56 percent higher for the LOW-SALT group compared to the HIGH-SALT group. It concluded that the less salt you eat, the more likely you will die from heart disease.

Low Salt intake is linked to:

It is, in fact, the Fructose and Refined Carbs that cause Insulin Resistance, which in turn, raise the risk of all Cardiovascular Disease, Obesity, Diabetes, and the other Chronic Metabolic Diseases. Fructose increases Uric Acid and Insulin Resistance which Increases Blood Pressure — NOT THE SODIUM.

MYTH #3: It Is Best to Eat Many Small Meals Throughout the Day to Increase Metabolism

Their theory is that if you are constantly eating throughout the day, you prevent what is called “Starvation Mode,” where your body holds on to every morsel of food and stores it as fat. In the study comparing eating 6 smaller meals throughout the day versus 1-2 larger meals, concluded that there is “no difference between nibbling and gorging.” Furthermore, there is no evidence that energy expenditure (metabolism) is altered by increasing meal frequency.

What if you introduce Intermittent Fasting? In other words, you squeeze your meals into a shorter period of time (4-6 hours a day) and fast during the rest of the day? Studies show that “Energy Expenditure INCREASED SIGNIFICANTLY” during Fasting States. This doesn’t mean you are restricting caloric intake. It just means you are eating the same amount but within a shorter window of time.

Why do our bodies increase energy and metabolic rate after short to medium term fasting? Our ancestors needed that extra energy to go after their “Hunt” and bring the meat home. They would be out for a few days usually before killing their meal or gathering their food. However, if their hunt lasted longer than 2-3 days, their bodies needed to go into that survival mode of slowing the metabolism until they ensured they were going to have their next meal soon.

Does the Starvation mode exist? Yes. But it doesn’t occur until you have fasted for more than 72-96 hours after a meal, not just a few hours.

MYTH#4: Egg Yolks Should Be Avoided Because They Are High In Cholesterol, Which Drives Heart Disease

The yolks are where all of the nutrition is!

And to take it further, the studies concluded that not only is there no risk in developing coronary heart disease by increasing their intake of cholesterol, but in contrast, they may have multiple beneficial effects by including Whole eggs in their diet. Despite eggs being high in cholesterol, they do not raise blood cholesterol or increase heart disease risk for the majority of people.

90 percent of cholesterol in the blood is made by the body and is needed for many bodily functions, including the manufacturing of hormones. It is not Fat and Dietary Cholesterol That Cause Heart Disease; It is Sugar, Gluten, and Excessive Carbohydrate Intake.

As stated above, the studies concluded “there were no clear effects of dietary fat changes on total mortality or cardiovascular mortality.” The notorious study done by Ancel Keys, called the “7 Country Study,” is what made everyone believe saturated fat caused heart disease; in reality the study included 22 countries but only 7 supported his hypothesis! So, he excluded most of the data that didn’t support his claim. When you look at the 22 countries, it concluded that SUGAR is what causes heart disease. And, furthermore, the evidence of the other 15 countries actually showed a correlation of lower heart disease connected to increased saturated fat intake.

In my upcoming post, Nutritional Myths PART 2, I will address:

Maximize the benefits of the Nutritional Tips discussed which dispel Myths 1-5:

Apply the Gentle Detox Protocol to Quicken your results, Increase your Mental and Physical Energy and Reverse Your Disease Risks.

The beauty of my formula is it’s gentle, quick and helps bypass the yucky feeling you get from most detoxification programs; in other words, DAY ONE you feel amazing.

While your body is detoxing, and you take the Keto, your Energy level is higher than ever before, Inflammation throughout the body is reduced immediately, and your body is in a “Healing” State — both Mentally and Physically. It turns On the Good Genes and turns Off the Bad Genes. It immediately balances blood sugar and improves Insulin Sensitivity, so your cravings for sugar and carbs disappear. And, as you apply the the dietary tips above — decreasing grains and sugar and increasing healthy fats in your diet, the benefits are amplified.

Save OVER 15% when buying The Gentle Detox Kit