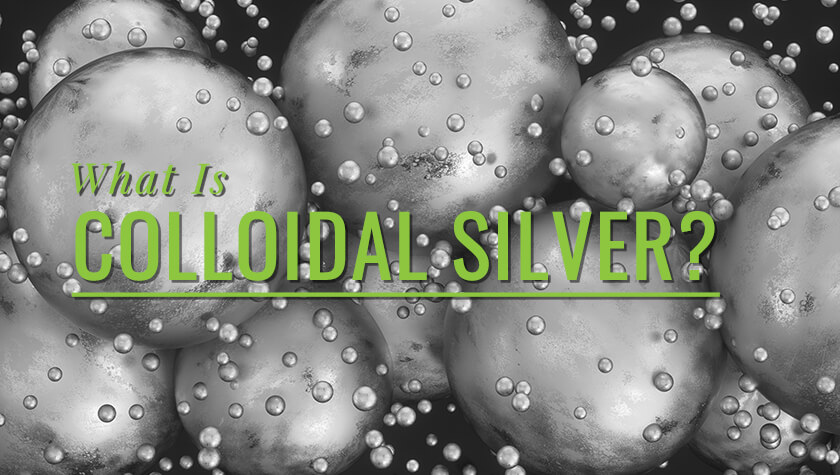 Today, when you talk about dietary supplements containing silver, you are talking about “colloidal silver”, which is the FDA generic classification for virtually all silver solutions. Colloidal simply means “particles suspended in water”. There are all kinds of forms of silver solutions that are quite different from each other, all with unique and ambiguous names and definitions.

Likewise, there are theories as to why each one works better than the other. Unfortunately, most of these theories seem quite convincing, and yet also seem diametrically opposed to others. Most people would take the position that much is unknown with regards to how colloidal silver works, the mechanisms of action, as well as admitting there is very little existing data regarding the products that exist, the technologies with which they are made, or how effective they are as dietary supplements.

Traditional colloidal silver of the past now seems somewhat old school, and it has been replaced with new hydrosol technologies that are now marketed without even mentioning the word “colloidal” on their bottle or advertising. In fact, the vast majority of all silver solution sold in America is manufactured and marketed as silver hydrosol.

Technically speaking, a silver ion is an atom or atom cluster of silver that is missing one electron. It is the outermost electrons of an atom that determine the physical properties of matter. Take away one electron from a silver atom and you get a silver ion which is water soluble.

Suffice it to say, generically, that all silvers will have some mix of particles (colloids) and ions (positively charged atoms or molecules). Most silver purchased today, similar to Accelerated Scalar Silver, contains significant quantities of ionic silver content in addition to silver particle content.

What is Nano Silver?

Nano-Silver is a term used for colloidal silver preparations where the particle size of the silver in solution is in a nano-particle size range.

First we should explain the difference between colloidal silver vs. ionic silver which can both be in the nano particle size range.

Ionic silver is a term used for positively charged atoms of silver.  These silver ions are usually composed of just 1 atom of silver and are the smallest form of silver.  They are missing an electron and as such carry a positive charge.

What Does Colloidal Silver PPM Refer To?

Colloidal Silver is a solution of pure metal silver particles suspended in water. Real colloidal silver is made up of 2 or more atoms of silver that is not bound to any other substance and can be separated out of the solution if so desired.  A high concentration of this type of silver with enough PPM’s will change the color of the water to a golden yellow tint. If the particle size of the silver is small enough and the ppm is lower, then the color of the solution can also be clear.  So, when you ask what is the most effective PPM for colloidal silver, it is more of a matter of the particle size and the absorption of the solution.

Which Is the Most Effective Form of Silver?

Marketers are now using the term Nano to create some new buzz around silver solutions, but all good silver solutions should be in the nano size range.  Nano is just a term describing the size of particles. It is true that the smaller the silver particle the better the effectiveness, and also when silver is in the nano range and not mixed with or bound to any other chemicals, then it is safe to use in the 10 PPM concentration.

Accelerated Scalar Silver contains both colloidal and ionic silver in the nanometer range ( 1.8 – 8.8 nm) and is the reason why it is clear.  Using a laser beam in a dark room, the Tyndall effect can be observed. The Tyndall effect is the light scattering effect when a beam of light hits very fine particles in a colloidal suspension.  This is one way to verify your ultra fine silver (or nano silver) solution.

Accelerated Scalar Silver is the more effective silver solution because:

Here is the Tyndall effect in action with Accelerated Scalar Silver.

What Are the Uses of Colloidal Silver?

First, let’s go way back into antiquity before the advent of Nano silver, Ionic silver, colloidal silver with 500 PPM or 2000 PPM, and all of the other variations of present day colloidal silvers.

Historical Uses for Silver for Healing:

Hippocrates, the “father of medicine,” wrote that silver had beneficial healing and disease fighting properties. He promoted silver for tissue repair and wound healing.

Ancient Greeks used silver vessels for water purification, and pioneers trekking across the globe used it keep their water safe and prevent dysentery, colds, and flu by placing silver dollars in their wooden water casks and milk containers to delay spoilage. Settlers in the Australian outback also added silverware in their water tanks to prevent spoilage.

In the Middle Ages, silver spoons were given by wealthy parents to babies. They believed that those “born with a silver spoon in their mouths” benefited from silver’s purifying and antibiotic properties. To this day, it is a tradition in some families to give silver spoons to babies! My grandmother gave me one for each of my children, and at the time I had no idea why!

In European folk medicine, it was believed that wearing silver rings may help ward off illnesses, while mixing silver powder with plants was used to help alleviate rabies, nosebleeds and edema (swelling caused by trapped fluid in the body’s tissues). Colloidal silver was also used to help alleviate various health conditions and diseases such as epilepsy, stomach ulcers and mental illnesses.

Uses of Silver From the 1800’s Through Today:

Silver was deemed as one of the few antimicrobial treatments available before the discovery of antibiotic drugs. By the 1800s, silver nitrate was used to treat wounds and skin ulcers. It was discovered that using fine silver wires for sutures helped heal repaired flesh.

During the times of “America’s Old West”, silver coins were put into drinking water barrels for protection against water-borne illness. In addition, silver was used to treat syphilis during the Civil War. During the 1880s, they used silver nitrate in newborn infants eyes to prevent post-delivery infections.

Even NASA Used Silver. During the mid-1960s, Johnson Space Center created a lightweight generator to distribute silver ions into the drinking water aboard Apollo spacecraft to kill bacteria. Later, in 2015 NASA approved the use of a silver-based water purification system aboard the International Space Station.

And today, Silver based Sulfadiazine has been deemed the standard of care in burn centers worldwide since 1968. Silver is everywhere, in all different forms from Colloidal silver to Ionic silver to Nano silver to silver Hydrosols. Silver is experiencing a resurgence as people become more educated on the importance of natural holistic health.  Silver has different approach to killing bacteria and does not create resistance as does antibiotics, which through over use has created super bugs.  This is one reason Silver solutions are reemerging as a preferred way to help those with antibiotic resistant infections.